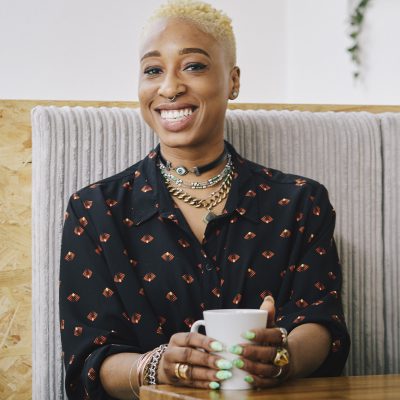 Shoom Isaacs is an all-around creative passionate about music + culture and describes herself as a free-spirit with a love for novelty. From playing the violin and taking ballet lessons, to fond memories as a little girl playing roots reggae and classic rock vinyl with her dad, rhythm + sound has always been something Shoom has enjoyed observing and being a part of.

Growing up mostly in New Jersey, the Brooklyn native, born to Guyanese parents, completed her undergraduate degree in Communication at Monmouth University in 2008. She spent the next 7 years in New York City as a Media Journalist at iHeart Radio interviewing names like Mary J. Blige, Wyclef Jean, Neyo, + Steve Stoute, and developing morning show content for affiliates like Power 105´s The Breakfast Club. Shoom took advantage of her access to talent, love for presenting, and skill to produce high-quality content and launched ¨In The Mix With Shoom¨ in 2014. The bi-weekly podcast was distributed by the Loud Speakers Network (pioneer podcast platform home to the Combat Jack Show + The Read), released 33+ episodes, garnered more than 350,000 listens (and counting), and fostered a strong reputation for producing innovative, quality content, the discovery of new music and talent, as well as the dissection of original samples . Past guests included Detroit rapper, Earlly Mac, who penned on G- Eazy’s Billboard 100 hit, “No Limit” ft. Cardi B & A$AP Rocky and the most listened to episode with independent R&B singer, Devvon Turrell, who according to Forbes is making 6 figures in streaming revenue + record sales.

Podcasting provided a steppingstone for Shoom to join Apple Music in May 2015 as apart of the team to launch the Beats 1 studio in NYC. There she produced 2 hours of live programming each day in conjunction with influencers including Crissle West and Lowkey. A year and a half later, Shoom packed up and moved to Valencia, Spain to start a master´s degree in Global Entertainment + Music Business at Berklee College of Music in order to expand her network, gain a global perspective of the music industry and transition her career towards the business side of things. For her thesis, a business plan was developed for her own record label, House of Shoom Records, presented to a jury of four including Scott Cohen, co-founder of the digital distribution pioneer, The Orchard. Positive feedback and encouragement was received.

Shoom believes it is her duty to use her creativity to serve, inspire, motivate and champion the growth and success of creatives worldwide and will continue to do so as she embarks in different levels of personal, professional, creative and spiritual growth.

Valencia, Spain was Shoom´s residence for the latter part of 2017 until the completion of her graduate degree in July, 2018, where she decided not to return to what was familiar. No more NYC; London is home now! Her mission is to explore, learn, integrate and impact the UK music market by connecting with like-minds and being an efficient resource in liaising music business services and creative ideas. As the Music Operations Manager at Lickd — the world 1st commercial music licensing platform — Shoom’s days are filled with chasing rights holders to clear master + publishing rights, acquiring catalogue, and playlisting music to be licensed by online content creators.

In her spare time, Shoom enjoys documenting her travels, canvassing the isles of thrift shops, writing and recording music, binging on documentaries, and scrummaging the internet for music and sounds she has yet to explore.